Over the course of a man’s life, many of his actions seem downright silly in retrospect.  Often times he doesn’t even know why he’s doing certain things even if they seem perfectly reasonable at the time.  One such action was getting a Prince Albert when I was at the tender young age of 17.  For those who might be unfamiliar with this particular piece of self-mutilation, a Prince Albert is a piercing that goes through the urethra and out the bottom of the penis. 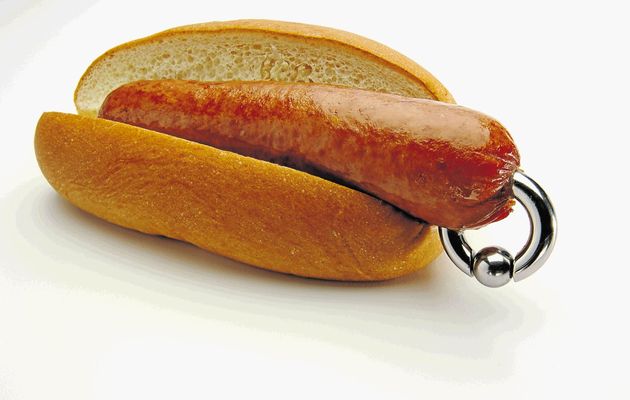 It was during my punk rock days.  Sporting a red mo-hawk which earned me the nickname Roosterboy(everyone, including myself, thought it was more clever than it actually was), wearing the same white jeans every day that had a hole so big I started to wear black thermals underneath lest my tender young business be exposed in front of God and everyone, and my tendency to stick things in my skin in an act of rebellion that was actually rather odd and offensive back then. I was quite the little non-conformist, if only because I lacked the sense of style to truly mimic other punks I knew.  I would sport safety pins in my ears or eyebrows until my allergy to nickel caused an infection, go days or weeks without bathing, which greatly contributed to my piercing infections, and draw anarchy symbols on the side of my head in order to stick it to the man.  So naturally, getting a cock piercing was only the next logical step in my never ending quest to be weird.  There was the added bonus I had heard about: that it enhances sexual pleasure for women, and me, ever being the giver, jumped right on that shit.

So one beautiful yet worn out looking body piercer and a whole lot of pain later, I was sporting a fresh and bloody ring in my dong.  I was given instructions on how to clean it, and told that I would have to wait seven days before having sex.  This was a gross miscalculation on the part of the piercer.  I left the body modification establishment and went on my merry way, spending the rest of the night bleeding profusely from my sore member.  Later that evening, while laying next to my girlfriend, I got an erection.  Needless to say, there would be blood. I left a stain on her jeans which she still has to this day(for some reason).

My girlfriend and I, lets call her Jennifer Connelly for the sake of her privacy, had not had sex at this point.  We were just about ready when I made the choice to poke a hole in the head of my penis and coitus had to be delayed.  So when the seven days were up, she and I got down to business in the typical romantic fashion of two teenagers, on the floor of my father’s living room while watching Aladdin with two of our friends sleeping on the couch.  This beautiful act of love making was one of the most painful experiences I’ve ever been through.  For one, she was so tight that it was like pushing a water balloon into a straw.  Couple that with the fresh puncture wound, and well, you get the idea.  We went through two condoms just trying to start.  I later brought out the KY jelly to aid us and after what seemed like seconds, was able to achieve an orgasm… an unbearably painful orgasm.  We decided we would wait two more weeks before trying again, got dressed and finished the movie.

Around six in the morning, when the searing agony in my pants had finally dulled to a throbbing ache, and with fatigue setting in, it was time for bed.  I kissed Jennifer Connelly goodbye, she woke up her friend and went home.  My friend Brian stayed with me at my house and slept in my bed next to me.

Fatigue can be a dangerous condition.  If you work around heavy machinery, or operate a vehicle in this state, you can seriously jeopardize your life and the lives of those around you.  Or, it can make you so loopy that you go to bed with your best friend and completely forget to pick up the condom wrappers and tube of KY Jelly you left on the floor of your father’s living room floor so that later, your father sees you and your friend walk out of your room in your underwear and puts two and two together without realizing there’s another number involved.

My father never asked.  I simply picked everything up with him sitting right there and never bothered to explain myself.  Part of me thought it was perhaps better to let him think I was experimenting with my sexual orientation than to bother with the real story.  There were some very awkward moments afterwards and weeks later he told me that if there was anything I wanted to get off my chest, I should just keep it to myself.  If he had any suspicions, he took them to his grave.  I’m not sure who he told about it, but my uncle has asked me point blank, on a few occasions, if I’m gay.

Fruitlessly lobbing mental bombs as an act of catharsis since the late naughties.